Will You Be the Next World Cup Billionaire? Take That Chance With Multilotto! 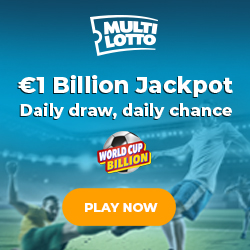 Six opportunities to win a BILLION every week with Multilotto! Hit the ball hard this summer at the World Cup!

Thirty-two countries are fighting to win the World Cup in Russia, but Multilotto has an amazing prize in store for you this summer: World Cup Billion!

This exclusive new lottery will be held every night of the week, except on Sundays, and will offer a spectacular grand prize of one billion euros.

The first draw took place on June 14, the day of the inaugural match of the global sporting tournament
in Russia, and the final draw will be held on July 15.

What you need to do:

Choose 6 numbers between 1-49 and one bonus number from 1-42. You will win the jackpot if the numbers you choose correspond to the ones that are drawn! The World Cup jackpot is one billion unbelievable euros. You need to buy a € 5 ticket to the World Cup Billions.

Can you hit it hard at this World Cup? Play and find out!